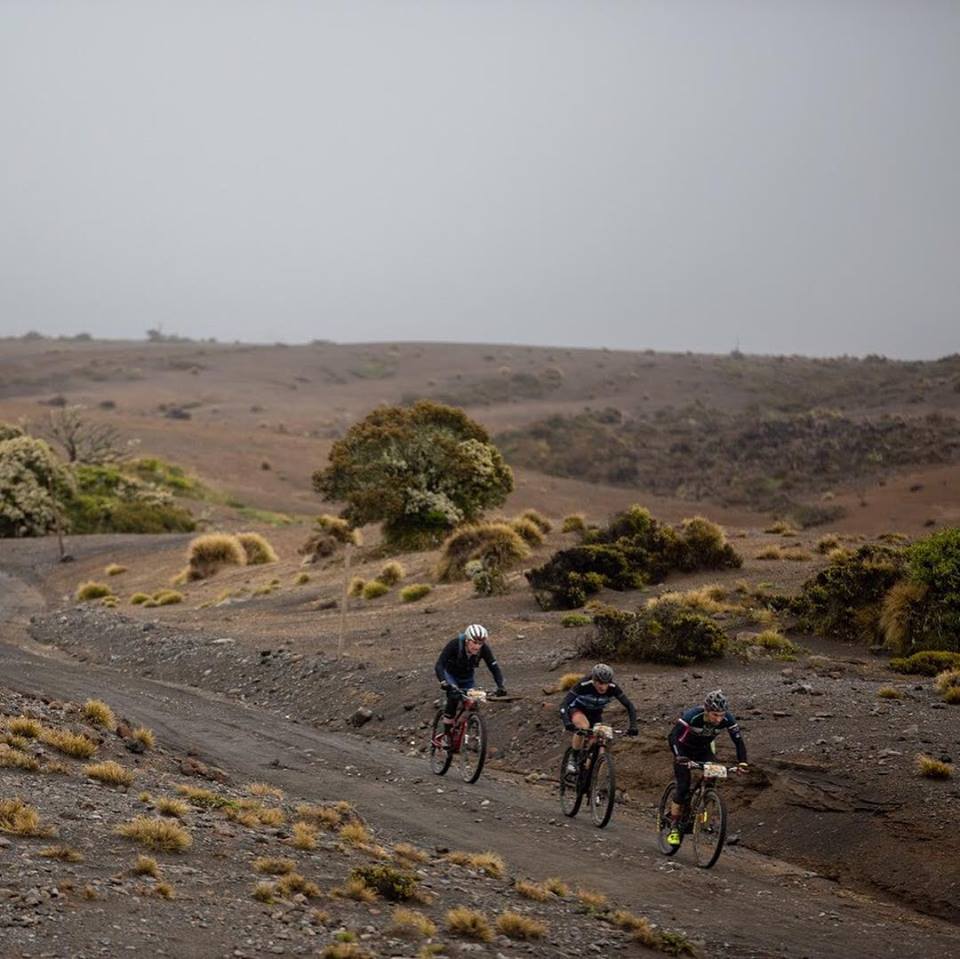 The 80km Ruapehu Express MTB event was new, starting from the top of Tukino ski field and finishing outside the Powder Keg in Ohakune it was always going to be a big on kms and adventure. However, the weather didn't play ball and thanks too rising river levels the course was shortened to an out and back over the military landscape totalling 52kms. An 6:30am departure via bus to the start line and a bumpy/rocky ride up the Tukino ski field access way into the clouds and misty rain was an appetizer of what was to come. We lined up on what felt like the top of Mt Doom and set off under a "controlled" start, some familiar faces donned the 160 peloton and I felt deflated given they looked like greyhounds on P. The controlled start was meant to mean a max 25km/hr speed limit for the first 6kms, no idea about others but I hit +57km/hr on the way down, so the pace setters speedo might have been off! From the bottom of the mountain "road" the racing started...and stopped...then  started again. The rain the night before had made the ground soft and it felt like riding in glue, you had to concentrate on looking for the right line to ride otherwise you'd be eating dirt fairly quickly.

At the turn around (and the half way mark-ish) the eventual winner and Gordon McCauley were duelling it out and I had settled into a chasing bunch of four. I mentally prepared myself to finish down the ranks. However, as we ground through the lunar landscape I perked up as another rider emerged from the misty clouds ahead, Gordon must have slipped and we caught him with about 20kms to go, we'd dropped one so we were back to a group of four all vying to make the podium. The positions changed multiple times, and with 6 kms to go and a downhill home the pace stepped up a notch with everyone trying to make a break…real roadie racing, it was great albeit painful. I looked back with about 3kms to go and I was alone, with some relief I buttoned off a bit and thought I'd done enough to take 2nd, little did I know a crash behind me had levelled two riders but one of them was on the charge back at pace. I looked back again and Gordon was right on my tail, buggar,  given his credentials as a six time national road bike champion/Commonwealth Games medallist this was going to be a tough ask. We cornered at speed into a very murky finish line with about 400m to go, more tyre sinking soft silt to negotiate, he edged ahead but we’d chosen different lines, my side firmed up and I just hammered the pedals like a mad man as I'm sure he was...taking 2nd place by 1 second I was stoked. Happy to ride with some real legends, and although the course was not as epic as it could have been the racing sure was.

Of note a near double podium for team Silversky, with Mrs Silversky coming in 4th in the 25kms...narrowing missing 3rd by 14 seconds. She'll be back!

Till next year Ruapehu Express!